This time last year Rose Dobbin and husband Tony were looking forward to the winter jumps campaign on the back of a best-ever season that had yielded 25 winners and unearthed a clutch of potential stars.

Over the next few months those dreams turned to nightmares as the string was dogged by a low-level respiratory problem that proved hard to detect.

The booster jabs that were required following the equine 'flu scare in February merely served to further weaken the horses' immune systems, and when a handful of them were sent to Perth for the spring meeting in April only to disappoint again, they were all roughed off including the summer horses.

It's been a long time waiting for the them to come right but the tide has already turned, with winners on successive days at Perth and Kelso this week...the portents are good for the winter ahead. 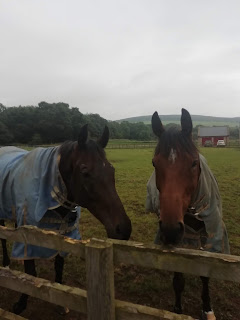 Amongst the splendid isolation of the Northumberland hills lies Hazelrigg Stables, housing some 45-strong with room for several more. The scenery is breathtaking even on a damp, autumnal morning, anticipation lying heavy in the air.

Unlike her ex-jockey husband, Rose wasn't born into this environment as she takes up the story...

"I didn't get into racing until university when I started riding out at Peter Monteith's, and then I went to Lambourn where I spent a bit of time with Nicky Henderson and Ed James and also rode out for Stan Moore and Charlie Egerton," she told me as we stood overlooking the impressive 'quad'.

"I came back up here and got going with the riding, starting out in point-to-points where we had our horses with Rhona Elliot, a good all-round horsewoman who was great to learn from.

"That progressed until we had a few horses under rules with Nicky Richards so I was over there for the next four or five years, which is where I got my grounding as a trainer and of course where I met Dobbs.

"From quite early on I thought I'd quite like to start training but I was having such a good time and was lucky to have some nice horses to ride, I made full use of that first.

"When I wasn't at the races I was always at the yard and was basically an assistant there, while Dad also had some horses with James Fanshawe so I'd spend the summers down there which was brilliant.

"It was Dad's idea to develop this training centre on his farmland and by the start of the 2009 season we were under way."

We watched a handful of youngsters striding up the Martin Collins gallop while in the distance there are three lines of schooling obstacles starting with poles and barrels through hurdles and fences.

Adjacent to that lies a grass gallop set against a gentle incline, yet while the Dobbins readily admit to trying to emulate the 'Greystoke way', they don't have the luxury of the steep natural inclines that surround the famous Richards yard they know so well.

The horses look well forward although they only came in a week earlier than normal, having enjoyed a longer, enforced break to fully recover from the ailments that bedeviled the yard last season.

With those dark days an increasingly distant memory, and, buoyed by the winners already on the board, there is a quiet air of expectation at Hazelrigg ahead of what will hopefully be a really successful campaign.

The following horses are expected to pay their way this season (in conversation with Rose Dobbin).

Jonniesofa
Obviously very fragile and if he stays sound we'll probably only look to run him three times. Was fit to run last year but started coughing at the wrong time. He'll run in a 0-135 or 140 handicap and how he gets on there will tell us how high we can shoot with him. His owner has ambitious plans but he'll only run when everything's perfect.

Jack Devine
He's had sinus problems his whole life and we've given him three wind ops already, but he's a good horse that stays very well and we've something like the Edinburgh National in mind for him at Musselburgh.

Coole Hall
He had a bad foot last year and had a poor preparation going into his only race of the season at Wetherby on Boxing Day. He's still only seven and we'll start again with him over fences hopefully back at Wetherby in a novice chase at the start of November.

Bako De La Saulaie
A decent horse whom we hoped might be better than he currently is, but has been frustrating. Being by Balko he should stay forever but we're a bit undecided about his best trip. Hopefully he'll be better than ever after the break and on the plus side he remains a novice over fences.

Planet Nine
A favourite in the yard, I don't know why it took so long for him to get the hang of jumping, he was a bit of handful in his early days and got loose once before a race at Kelso. However he's settled down now and we'll stay over hurdles with him for the time being - it might be nice having a high class staying hurdler.

Some Reign
Has played up at the start and refused to race a couple of times but we found that he was suffering from a 'kissing spine' which we used to inject, but have had the problem operated on now so hopefully he'll put all of that behind him. Ran well over 2m when the horses weren't right last season but his future lies over further, on ground that's neither too quick nor too soft. He's a gorgeous horse.

Bigirononhiship
He was really unlucky when falling at Haydock, he's a strong horse who isn't quite as quick as he thinks he is. He doesn't necessarily want soft and on better ground you'd think he'd stay 3m no problem. We always thought he'd pick up a decent handicap somewhere and you'd like to think he's a bit better than his current mark.

Slanelough
He was desperately unlucky not to win last season, taking a crashing fall jumping the last at Haydock after unseating there the time before. He jumps and stays and is becoming more settled in his races, so he might be a little more versatile in the way that we ride him.

Hitman Fred
A nice strong son of Getaway, he came back with sore shins from his run at Doncaster and we won't be running him on good ground again. He was one of those we sent to Perth in April that travelled well and then emptied out, so you can put a line through that. You'd like to think he's well handicapped off 107 and he'll probably stay over hurdles for now.

The Hollow Chap
Won a four-year-old Point To Point in Ireland but has been quite a keen and nervous individual and were disappointed with his two runs last season, but he's only young and has plenty of time on his side. He's had some soundness issues which we are just working through but I do like him and he could be anything.

Monfass
Another we kept taking to the track last season and was not getting home, but he's come back looking as well as he ever has. He seems much more relaxed now and like most of ours should be ready to run in October, when there's a race at Carlisle for him. We'll look at the option of going over fences with him as well.

Trooper Turnbull
He's a nice big horse who ran well in his only bumper start at Newcastle. Dobbs wants to try to win a bumper with him but I might just go straight over hurdles and we think he could be alright.

Doktor Glaz
He's been a bit fragile over the years with his legs and he just had a touch of tendinitis so we took the decision to give him a year off. He finished off the season before really well and the drop to 2m4f seemed to be the making of him. I wouldn't rule out 3m again at some point and I'd like to think he'd be able to win from his higher mark.

Definite Wisdom
He was one of those to disappoint us over Christmas when we were expecting to see a bit more from him on his first run in a handicap. He's a horse I've been really pleased with since coming back in and will now go straight over fences.

Sweet As Candy
Got a really high mark for winning at Ayr the season before last but then went and ran really well in his first handicap. Has had some time off with a bit of a suspensory problem but we're looking forward to getting him started over fences.

Le Gavroche
He hasn't shown a great deal on the track so far but he has plenty of size about him and we've had him hobdayed, so hopefully we'll start to see some improvement this time.

Smuggler's Stash
He didn't have a hole in his tendon but it was bad enough to give him some time off. He's a fun horse on his day and when he gets his head in front he jumps from fence to fence and he's a proper northern staying chaser. He seems in really good form and we might just fire his soft palate because he's a bit stuffy.

Do Not Disturb
He hasn't been moving great and we've just got him started again. I was disappointed with his run at Ayr because we went there thinking he's one of the nicest horses we've had, but it was heavy ground and he was only beaten 16 lengths so it wasn't a disaster. He's a lovely big horse and he'll go straight over hurdles.

Le Cheval Noir
Won his Point to Point but was a bit light framed and never quite right last season. However, he has come back having gained plenty of weight and could be a nice sort if we can get him right. Will start off in a bumper.

Rath An Iuir
A lovely horse who is proving very difficult to train. He was quite weak when we got him and then had some recurring issues all last season. I'd love to see him on the racetrack but patience is wearing thin!

Fete Champetre
One of a handful of lovely young horses Dad bought last year. By Robin Des Champs he's a gorgeous big horse who is going to need plenty of time but is a proper stamp of a chaser who eats up the gallop, and is an exciting one for the future.
Posted by Adam Norman at 14:04