I heard the news yesterday evening.
I was surprised by tears; easily they came.
Too soon, too soon.

In truth, I hardly new Ken. But this is my story.

As far back as I can remember there would be the occasional winner in the North, ridden by a jockey in red silks with large yellow spots, which had usually been well placed to land a gamble by 'shrewd connections'.

The Slacks know the time of day, the saying went. Mrs E Slack held the licence while big Arthur put the money down. When 'Slacky' entered the betting ring you would see the ripple effect.

Around five years ago when I started going racing regularly and writing this blog, I used to add a couple of images to bring a bit of life to the stilted pages.

In March, 2015 the training licence was now in the hands of Mr K Slack, and it wasn't long before he was leading in his first winner, Grand Vintage, at Catterick. As luck would have it I snapped the camera on the phone just as Henry Brooke playfully lifted Ken's ubiquitous flat cap as they came in.

I never saw Ken without some form of cap, possibly worn to hide his prematurely balding head, maybe not. The only time I saw him take it off was when one of his jumped the last 10 lengths clear and off it would come, swung around his head in celebration.

A few days after Grand Vintage's landmark success I got an email from the trainer saying that he'd seen the blog and could I send him the picture. In my mind a framed print held pride of place in his house somewhere.

I introduced myself the next time I saw him at the track, he was with his mum Evelyn and we had a nice chat about this and that, it turned out to be the start of a golden period for the yard, Ken's 23 winners the following season came at a strike rate of 33 percent.

Although I go racing three times a week during the winter months I'm not one to be accosting trainers, who are going about their own business and I feel have a duty to their owners on raceday.

With Ken it was different, I'd always keep a look out for the big fella in the cap but it was often him that found me. 'Hi Norm, fancy owt? was the usual opening gambit, and so easy was the conversation I'd often walk away forgetting to ask how he thought his would go in the handicap chase.

He'd clearly picked up the punting gene from his dad, who even he referred to as 'Slacky'. I was in the ring at Sedgefield one day when I found Kenneth next to me. "What do we think Norm?" he'd ask, "Must have a chance," I replied, and before I knew it he'd thrust a roll of £50 notes into my hand and asked me to stick it on for him.

As I made may to the stands and took the binoculars out Ken was once again beside me - I'd no idea he'd been sat on the steps where I was stood - rising to match my 6ft 3in gaze.

We watched the race unfold together but unfortunately the trainer started in with the premature 'ei eis' at the top of the hill, and old Jokers And Rogues played his usual game of racing freely in front before stopping to nothing on the run-in.

"Ah well, next time eh," he said as he left for the jockey's debrief. And that summed him up, he always seemed to take defeat as well as victory, not a common theme among racing folk. He had a great sense of humour and outlook on life.

I hadn't seen Ken since the spring when he had a runner at Catterick before Christmas, he was wearing sunglasses and it wasn't a sunny day. I'm thankful that we had a chance to sit down and talk, he told me the illness had caused him to lose an eye as a boy and he knew that one day it would return.

"The last 40-odd years have been a bonus," he said as we departed.

The tears are coming again, and I just want to say goodbye one more time. 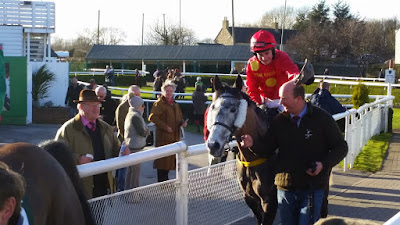